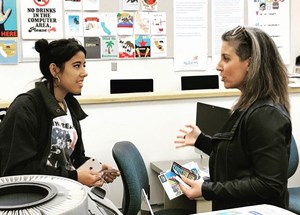 On Friday, December 1, 2017 SPHS Club Reel Stories welcomed Esther Pearl, Camp Reel Stories founder and former Pixar Animation Studios filmmaker, for the official launch of the club’s film curriculum. For the next 20 weeks, club members will be creating a short film under the direction of Camp Reel Stories leadership comprised of female filmmakers. Club Reel Stories is the first high school film club for girls and seeks to advance the idea that when women and girls are better represented behind the scenes in the media, they will be better reflected on the screen.